I've come under some fire on Internet forums for "misrepresenting" the GPC concept as being heavier than it would in actuality. While I feel that the concept in my The Case Against article - though constrained by several requirements set forth by some members on Mr. Williams' forum - is a perfectly valid approximation, today I hope to address this complaint by creating the absolute lightest GPC estimate I possibly can while still sticking to conventional ammunition design and fulfilling the basic requirement that it not have any less residual energy at 1,000 m than M80 Ball.

First, I need to recall that M80 produces just over 410 J at that range (.195 G7 BC, 2,750 ft/s muzzle velocity, Army Metro atmospheric conditions). You can see this for yourself if you head over to JBM's ballistic calculator and plug in the appropriate values. My GPC must meet or exceed this value. To really get the lightest weight possible, I'm going to need a very good form factor for my bullet- since this is all about retained energy at range. The best form factor I know of for a service projectile is .889 i7, and belongs (paradoxically) to the first spitzer rifle bullet to see service, the French Balle D, an all-brass 12.8 gram boattail projectile with a fairly unique design. If I scale that bullet down to .264" caliber, it weighs just under 7.2 grams.

Since the Army has spent a bunch of time, money, and effort refining their M855A1 EPR design, it seems unlikely that any new caliber would have a substantially different projectile design. Fortunately, I only need to make moderate changes to the Balle D to accommodate this. The scaled-down projectile will be slightly longer - proportionally - than the original at 33.5mm in length, as well as slightly lighter at 7.0 grams. Now, I can find my ballistic coefficient, which works out to a very impressive .249 G7. Running that through JBM a few times tells me I need a muzzle velocity of 2,800 ft/s to meet M80's energy  at a kilometer: 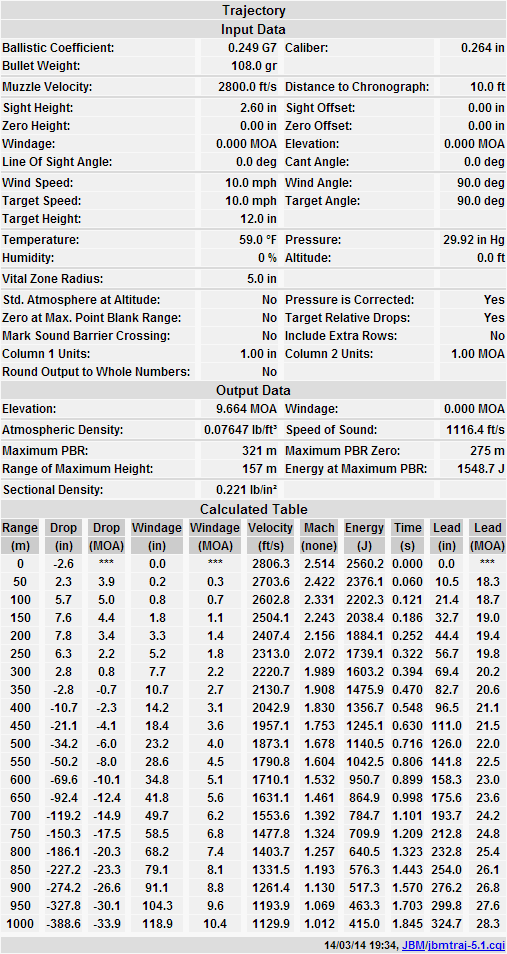 These are some very impressive ballistics! Now, let's see how much this performer would weigh. To shave as much weight as possible from the design, I am going to use M855A1's peak pressure of 62,000 PSI, as well as the same case taper and shoulder angle of 5.56. Many have argued that 62,000 PSI is too much pressure for a rifle cartridge, and that 5.56's case taper and shoulder angle are a detriment to its reliability in automatic weapons, which is part of the reason why my last estimate was so heavy. This time around, I'm pulling out all the stops; no expense will be spared making this GPC as light as I can. In my opinion, the .5 degrees case taper and 23 degree shoulder of the 5.56mm are adequate, and the 62,000 PSI peak pressure is made safe by more thermally stable propellants. I will move on.

After doing several run throughs with the Powley computer, I found that about 41 grains case capacity was needed to generate the sort of performance I was looking for from 20" barrels (this, as far as I know, being the length of barrel chosen by Mr. Williams as optimum for his GPC). Using Solidworks, I created a fairly svelte case: based on the .30 Remington case head and only 46.4mm long, it has almost exactly 41 grains case capacity: 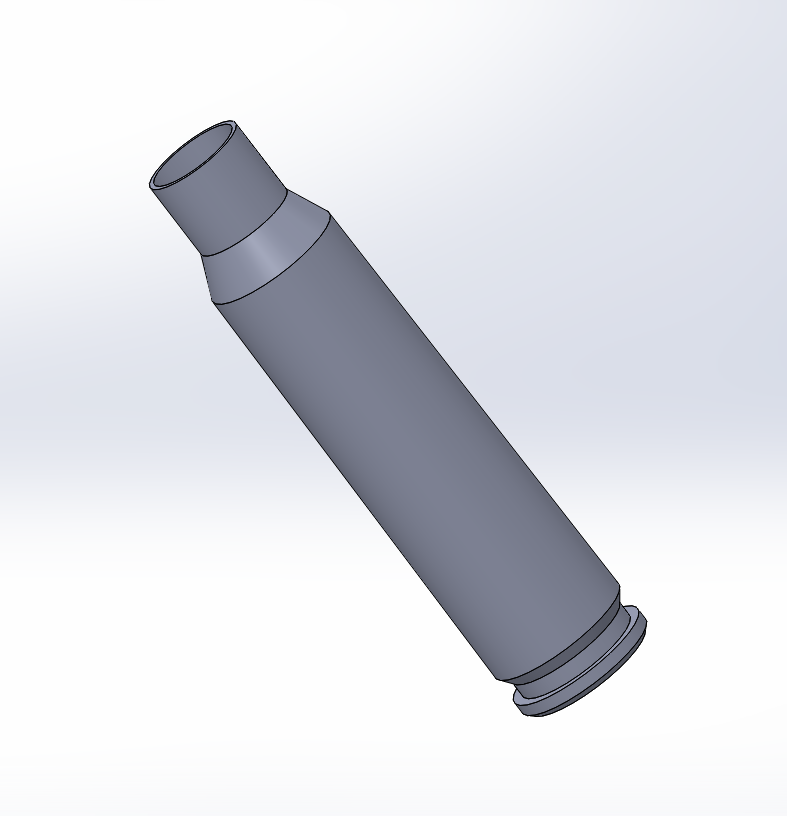 Here are the Powley results for my completed cartridge: 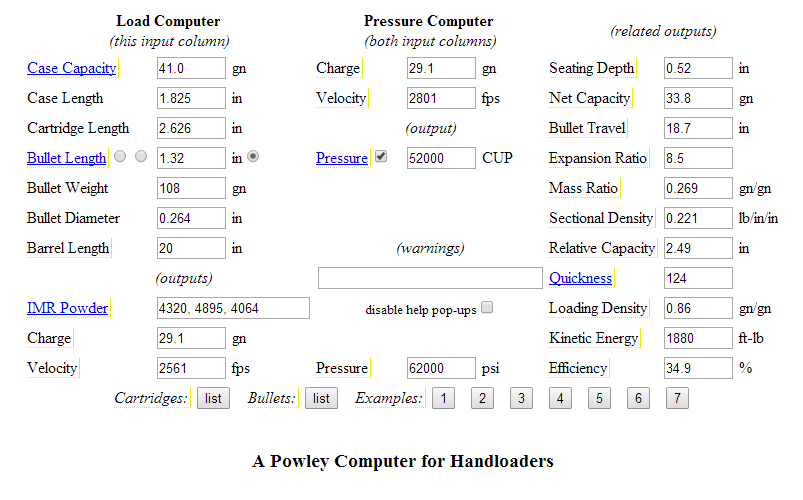 Judging by the propellant weights of both the 6.8 SPC and the 6.5 Grendel, though, that 29.1 grain charge weight seems a little light to me. A spit-in-the-wind estimate puts me at 34.7 grains charge, which sounds more reasonable. Now, we can figure out how much the cartridge weighs.

The bullet, of course, will be 7.00 grams. Large rifle primers weigh about .35 grams, as I mentioned in The Case Against. The charge, in metric, works out to 2.25 grams, and the case itself weighs 7.39 grams if made of brass, or 6.91 grams if made of steel. I will assume steel-cased ammunition, which gives me a total weight of 16.51 grams per cartridge (16.99 grams for brass). 16.5 grams is absolutely fantastic, and lighter even than Mr. Williams' target weight for a GPC with a 7 gram bullet. Let's look at what that means for the infantry platoon:

Weight of ammunition (only, not including magazines or links) of infantry squad breakdown by squad role:

Weight of ammunition (only, not including magazines or links) of weapons squad breakdown by squad role:

Weight of ammunition of weapons squad with 20 gram GPC: 63.8 kg

Weight of ammunition (only, not including magazines or links) of platoon headquarters breakdown by squad role

Weight of ammunition of platoon headquarters with 16.5 gram GPC: 13.4 kg

Weight of ammunition of platoon headquarters with 20 gram GPC: 16.8 kg

Total weight of ammunition in the platoon: 229.3 kg

Total weight of ammunition in the platoon with 20 gram GPC: 336.8 kg

Weight increase in the platoon if Carl Gustafs are issued in place of 60mm mortars: 47.5 kg


As my readers can see, even this extremely optimistic estimate still adds almost fifty kilograms of ammunition to the infantry platoon (to say nothing of the increase in weight from the heavier belt links, magazines, and weapons that would be needed to chamber the cartridge). I've heard some GPC proponents claim that the savings in weight of a GPC vs. 7.62mm would balance out its increased weight vs. 5.56mm weapons at the platoon level; this is clearly not true. The GPC - even the lightest possible GPC - represents a significant weight increase for the infantry rifle platoon (or a corresponding reduction in rounds carried). Further, even replacing the platoon's 60mm mortars with direct-fire recoilless rifles is lighter than switching whole hog to the GPC. The Army has already decided to introduce Carl Gustafs to the infantry, which in my mind neatly solves the issue of having to call in air or artillery support when under fire from long-range Taliban ambushes; this being the primary rationale for the GPC in the first place. If the mortars are left home, American soldiers will be able to project high explosive firepower at long ranges without the need for an expensive and time consuming ammunition change-over, and with no more additional burden at the platoon level than would result from fielding a GPC.

This cartridge I've designed is an impressive ballistic hot rod. It would make some sense for 7.62mm weapons to be replaced with weapons in a similar caliber, retaining the capability of that round while slashing the weight of ammunition by about 30%. I felt much the same in my initial article about my 20 gram GPC estimate. Anything that reduces the soldier's load without reducing capability or introducing problems is probably worth doing, if you can afford it. What I disagree with is the idea that a cartridge such as this should be a general purpose cartridge; that it should be issued to riflemen as well as designated marksmen, machine gunners, and as ammunition for static machine guns. The additional weight of ammunition and rifles, and increased recoil and size, sours the idea considerably in my mind vs. the two caliber system.
Posted by Nathaniel Fitch at 5:56 PM