At the request of commenter Angus McThag, I will do a (short) comparison of the 6.8 SPC loaded with the 85gr Barnes TSX to simulated M855 and M193 loads. I already whipped up a simulated M855 load in my previous post about 5.56 replacements, and I will be referring to that regularly through this article, instead of duplicating the information here. In addition, I will not be using Solidworks models for this estimate, as a reasonable estimate can be attained without doing so.

In order to make the comparison as even as possible, I need to create a Powley computer performance estimate. While using the Powley computer may not necessarily give the most accurate numbers in terms of performance for a given cartridge, it does provide the most even basis I know of for comparison. In this case, our 85gr 6.8 SPC provides a somewhat sedate 2,770 ft/s with an 85gr bullet: 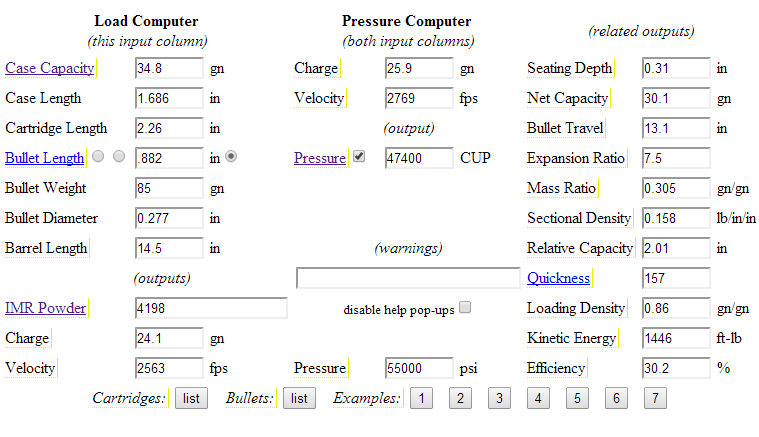 As you can see, the peak pressure in this example is only 55,000 PSI, vs. the 58,000 PSI used in my last comparison. It is lower because 55,000 PSI is the maximum average pressure of 6.8 SPC according to SAAMI. If 58,000 PSI is used, the cartridge gains about 30 ft/s. The value of 2,770 ft/s sounded a bit low to me, and I thought maybe the Powley computer was giving me an incorrect result. However, when I adjusted the barrel length to 24" and checked it against Hodgdon's reloading data, I found that it was only about 41 ft/s lower than their value. 41 ft/s is definitely enough to make a difference in the performance of a cartridge, but it doesn't imply some kind of error in the computer itself (individual shots can often vary by more than 40 ft/s). For the same of comparison, I will continue to use the 2,770 ft/s value, instead of adjusting it, while noting that real-world values may be slightly higher.

Plugging this into JBM Ballistics' calculator, we get this (G7 BC is from here): 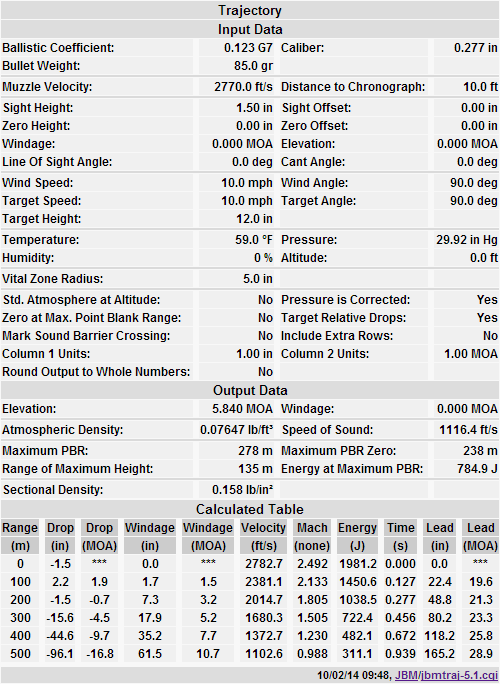 Just over 300 J at 500m? Jeeze, that's not that great. As we found in my last post on the subject, M855 produces over 400 J at that same range. Well, OK, but which cartridge weighs more? Your first clue is the weight of their respective bullets. Having not rendered 6.8 SPC in Solidworks yet, I can't give you an exact figure, but using the weight from the 6.8 Tech Information page I linked earlier of 28 rounds of ammunition, I estimate that the 85gr 6.8 SPC loading would weigh over 15 grams. Given this, it compares pretty unfavorably to M855, producing only 20.5 J/g at 500m, compared to 35.5 for 5.56.

Why is this value so low? The 85gr TSX is a flat-based bullet, with a poor form factor. It's also pretty light for caliber, and has a fairly low sectional density (about the same as 55gr 5.56)). In light of that, maybe we should compare it to M193: 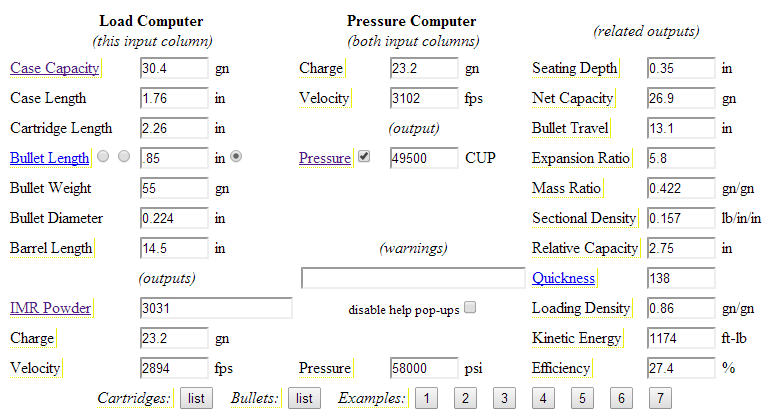 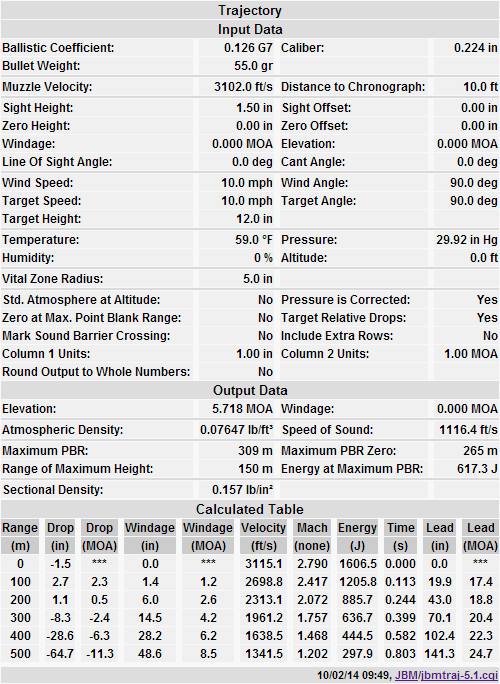 It only provides 4% more energy at 500m. That's... Rather disappointing. We know that M193 has a cartridge weight of 11.5g, giving it approximately 25.9 J/g at 500m, a full 26% better than the 85gr TSX 6.8. The TSX definitely has the edge in bullet design from a terminal effects standpoint, but those ballistic results simply aren't very impressive.

I don't think I'm very happy with this result. On the chance that the 2,770 ft/s figure is just too low, I tried to dig up the absolute best performance figures I could for the 85gr TSX, and see how they compared to my Powley estimate for M855. I didn't find much, but I did find David Fortier's article on LWRC's Six8 UICW and its special ATK-made 90gr Gold Dot ammunition. Close enough, I think. To get some sort of performance baseline, I did a little math and got an estimated value of 2,940 ft/s from a 14.5" barrel for the 85gr TSX (this is essentially estimating if you pulled the bullet on an ATK 90gr Gold Dot, and reloaded the case, powder and all, with an 85gr TSX, and then fired it from a 14.5" barrel. Of course, this assumes that the values in the article are correct, and I suspect they're a bit optimistic.). Now we're talking. At 500m, this is what it does: 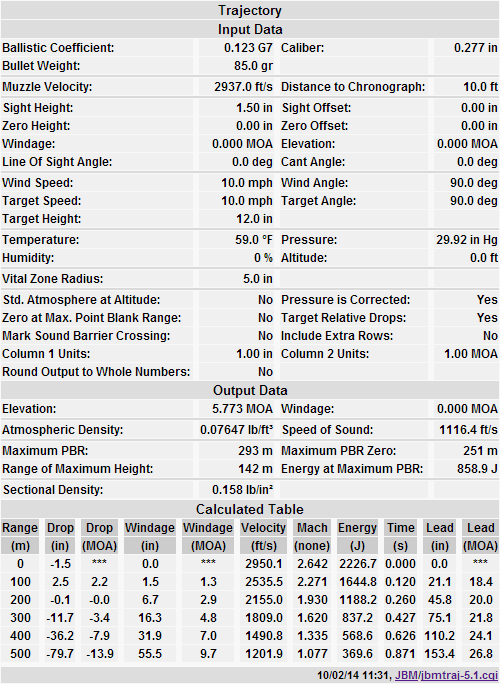 It gains almost 60 J at range from the extra 170 ft/s muzzle velocity, but it still doesn't compare very well to either 5.56, producing only 24.3 J/g at 500m. That's not great performance for a "best case scenario" of the lightweight 6.8mms.

This article illustrates most clearly to me the value of high form factor, long ogive bullets. At the muzzle, the 6.8mm with lightweight bullets looks fairly impressive, but the poor form factors of those bullets really let it down after a half-kilometer. Even by 300m, the initial estimate for the TSX has fallen below M855 in terms of absolute energy, not to mention energy per pound. The 6.8mm cartridge leaves even less space than 5.56 for long ogive, slender bullets, and I think this is the key to understanding its fairly lackluster performance with low sectional density bullets.
Posted by Nathaniel Fitch at 7:56 AM